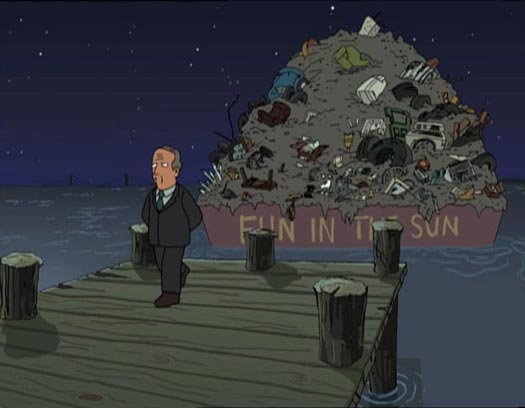 According to a well produced and pleasantly educational porno found on the internet, New York City was suffering under an avalanche of trash by the year 2000. This was a bold prediction by Mr. Groening, as the episode aired just one year prior, in 1999. Apparently, the city's solution was to secretly collect all its filth on the world's largest barge and just sort of send it adrift, like an ugly, smelly, message in a bottle, addressed to whatever poor country it washed up in. Unfortunately, for 50 years, it washed up in many countries, and it was rejected by each and every one. America tried dumping its trash all over the neighborhood and the world collectively responded "No Thanks."

This monument to the "Greatest City on Earth"'s awful littering problem finally wandered back home like an unwashed stray cat around 2052, when we resorted to more extreme solutions.

The Key word here is "secretly". If this episode really does portray the truth, then here in the year 2019 I might not have any idea that as I write these very words, a small country's worth of proud American disposable crap is out there, perhaps in the middle of the Pacific or sightseeing along the coast of France. Mr. Groening never specified which country was the "really smelly one" mentioned in the video. For this reason, we can't give a definitive ruling on the truthfulness of this statement for another three decades or so, when fate will supposedly bring our sins back to our own shores. In the meantime, let's examine these claims by pretending we're educated enough to interpret boring EPA reports[1].

Mr. Groening was right about one thing, we're throwing away a lot of shit. The rate at which we're throwing away shit is also increasing, and has been since the 60's when we started gathering data on our shit. To be fair though, we're also recycling more shit, and the population of the Earth is going up as well, and more people produce more shit in the same way that more people produces more, well, shit.

Interestingly, it would seem that our recycling habits are having an effect on our landfills, because while the tonnage of municipal waste being recycled is growing, the amount being shoveled into New Jersey apparently leveled off and even shrank somewhat somewhere around, you guessed it, the year 2000. That doesn't mean that we've stopped producing trash, of course, by God do we produce trash. We're just getting better at dealing with it. Either that, or we started a secret government program to take massive portions of said trash and put it on barges in the ocean around the year 2000. Gee, what a novel idea.

While the One Barge Theory has a nice hook to it, I'd argue Mr. Groening was thinking too small. After all, one barge full only holds the load up to that point, not going forward. You'd have to develope a system of periodically producing more and more barges to handle more and more trash, year after year, decade after decade. Littering isn't the type of problem you solve once, like a backed up septic tank. It's a problem you have to live with, like chronic diarrhea. You need a slow and steady dose of medicine, and our medicine is recycling (and maybe sea-bourne landfills). New New York Mayor C. Randall Poopenmeyer claimed that the city had been trash free for 500 years as of 3000, but that's 500 years of ramping up recycling capacity and stealthily filling the oceans with the AOL cd's and Bart Simpson dolls in the meantime. If this episode really is true, we've got a lot more to deal with in 2052 than just one filthy party yacht's worth of 50 year old unmentionables.

Side note[2] : New York isn't even the top ten states in terms of most trash in landfills by state. This could be because they were the only one crafty enough to employ the same "push it under the rug" strategy as a teenager pretending to clean their room, but still, it's a small part of a large problem. A true visionary would be putting the entire state of Nevada out to sea on a barge.