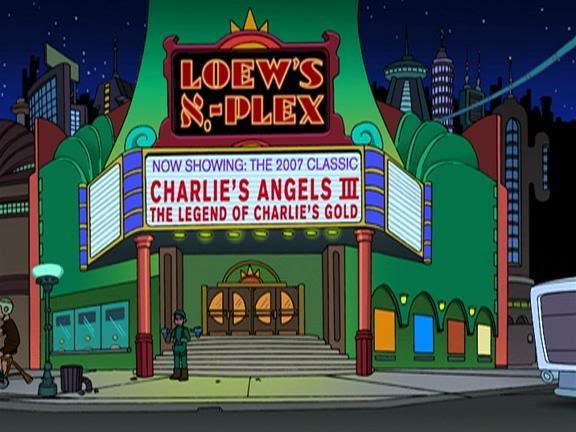 One of Hollywood's favorite pastimes is digging up an old media franchise to try and pump some money out of its grave-robbed corpse. From old movies to old TV shows to movies and TV shows that aren't even old yet, nothing is sacred as long at it hold potential profit. Even Futurama itself was not immune to a devastating amount of blasphemous false scripture in its later years. On the subject of TV: In the year 2000, Charlie's Angels, based off a 70's TV show about 3 women working as private detectives, was released to a resounding "meh" from audiences everywhere. Contemporary film critic Roger Ebert called it: "...like the trailer for a video game movie, lacking only the video game, and the movie".

Not wanting to snuff out a barely smoldering fire as long as it squeaks over the production budget, a sequel (Charlie's Angels: Full Throttle) was put out in 2003, to an even grumpier and more resounding "meh". Critic aggregate site Rotten Tomatoes described it as: "Eye candy for those who don't require a movie to have a plot or for it to make sense." Stirring stuff. So stirring, in fact, that despite this episode being written before the sequel even existed, Mr. Groening was keen on letting us know that 2007 would bring us the classic that would endure almost a thousand years into the future: Charlie's Angels III: The Legend of Charlie's Gold. It would contain a vampire. And an explosion.

This did not happen. Executives did confirm plans for a third, and even fourth, film, but these plans fell through as a result of no one giving a shit. In 2019, the series was rebooted with three new stars, made a small profit, received just as much glowing praise as the last two, no one really noticed, and the world continues to spin (at time of writing anyway).

It's difficult to determine precisely where Mr. Groening went wrong with this one. It's easy to call this a parable of Hollywood's never ending greedy desire to produce sequel after sequel, but then why stop at 3 after a thousand years? Why not Charlie's Angels 17: Charlie's Techno-pocalypse? Why did this film from 2007 still garner theatre showings? Perhaps the film is a classic in the same way that pictures like Rocky Horror Picture Show and The Room are classics: ironic cult experiences brought out like a freak show, for nerds to throw popcorn at the screen while making out with their robot girlfriends. The film certainly seems cheesy enough, given our precious few glimpses. Fry certainly seems the type to genuinely enjoy what more intellectual film-goers of the future would only enjoy ironically.

I'm not the prophet here, only the interpreter, but I'll be keeping my eye on the cult cinema scene for the next few decades. It might not be the Legend of Charlie's Gold, but when the next Charlie's Angels gets a critical spit-roasting, you can thank Mr. Groening for calling it when the film bombs so hard our great-great-grandchildren are making memes about it.