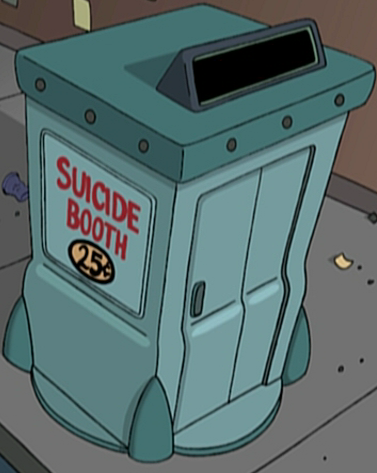 In the very first episode of the show, Mr. Groening drops us right into dystopian territory with the suicide booth, a product that showcases both the commoditization of human life, and the capitalistic control exerted over it. Buckle up, kiddos, this show isn't fucking around.

Here's how it works: First, the user steps inside and drops in a quarter, and already it's time to take this train off the rails, because we've gotta talk about the value of a Dollar. Futurama demonstrates in a number of episodes that the US Dollar (or at least its similarly-named equivalent, since Earth has become semi-unified under a single flag) has retained roughly as much buying power as it held in 1999. A few examples:

I'm not an economist. I'm not really an anything. I have no idea how the concept of inflation has utterly failed to affect the perceived future of Futurama. Perhaps an economic collapse resulted in a reset of currency value. Perhaps government regulation stepped in to prevent the hassle of printing larger bills. Perhaps everyone got tired of watching economists complain about the economy, killed them all, and then nothing bad happened again as a result and the entire profession was written off as a superstitious fad, like bloodletting.

What I do know is that a quarter in the year 3000 is roughly equivalent to a quarter in the year 2000, and a world in which a company can successfully do business in the suicide market at quite literally 25c per head is terrifying. Phone booths, the concept from which the suicide booth was based, at least had the benefit of being a publicly funded service. Suicide booths, on the other hand, have quite clearly arisen from private companies, as told by the automated voice, for some reason recorded despite being heard only by the dead: "Thank you for using Stop And Drop, America's favorite suicide booth since 2008".

The suicide rate must be absolutely bonkers to meet costs. I can't imaging the maintenance and biohazard-related safety features required for such a device. Perhaps it was created as a response to overpopulation, and a quick trip to the suicide booth is simple one's civic duty in combating the overinflation of human life? Of course, Stop And Drop could have taken the other route, lowering production costs and pumping out numerous cheaply made killing machines. After all, who would complain? A successfully killed customer would never be able to offer a 3.5 star review, no matter how crude and inefficient; the only negative ratings would come from those who lived. Stop And Drop successfully figured out the ultimate pass/fail, Yelp-proof business. The best customer survey is the one that never has to be counted because it never came back.

Anyway, the user drops in a quarter, has their pick of a few different methods of death ("quick and painless" vs "slow and horrible"), and the deed is done. No mention is made of how the remains are discarded, and I'm not sure I want to know the answer to such a question.

At time of writing, no suicide booth has ever been commercially produced, nor could I dig up any evidence of a company named "Stop and Drop". OK, so I found a daycare/pre-school named "Stop N Drop" in Paris, TX, but I don't think even Texas has a big enough violence boner enough to start a company like that with children. Speaking of insane places though, it's Australia to the rescue, because a wacky bastard from the outback named Philip Nitschke, in 2018, unveiled his plans for what he calls The "Sarco"[1][2], as in Sarcophagus. As in a human-sized pod which, when stood on its end, might resemble some kind of booth.

It's designed, incredibly obviously, to "provide people with a death when they wish to die", which is of course how the world's most boring engineer would describe suicide. It's a sarcophagus for fuck's sake, methinks he needs to hire a metal lyricist to help with the marketing efforts.

A prospective user would first take an online test to determine if they are "sane", and would then be granted access to the device. You climb in, close the door, press a button, the pod fills with Nitrogen, and after a minute or so you pass out and eventually die. Do I even need to draw comparisons? "The Sarco will not be for everyone, that's clear", said Nitschke. Astute observation, buddy.

However, it might be the case that looking at real world "fuck this I'm out" solutions is perhaps missing the point of Mr. Groening's prediction. 2008 was the year widely cited as the start of one of the worst economic recessions in recent memory. A combination of a burst housing bubble and number of other factors (#NotAnEconomist) caused the economy in the US and Europe to plummet. As a result, rates of poverty, unemployment, and, yes, suicide rose substantially[3]. Would 2008 not be the perfect year for America to suddenly develop a "favorite" method of suicide? We laughed at Futurama's jokes without stopping to consider the "why" that allowed them to happen. Mr. Groening may not have accurately predicted the commonality suicide booths on the streets of New York, but he may very well have predicted the worst economic crisis since the Great Depression.

And we didn't listen.