S02E08 - Xmas Story
"Listen buddy, I may have lost my freakishly long legs in the war of 2012, but I've still got something you'll never have: a soul!" - Conan O'Brien's Head 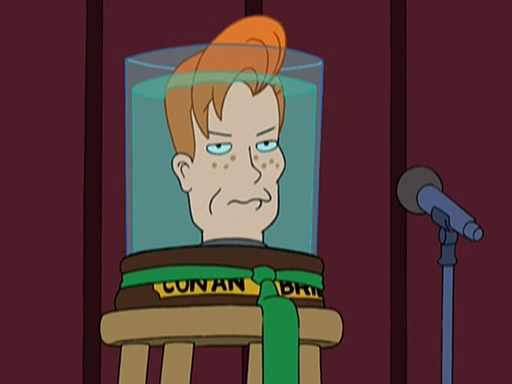 According to the head of notable 20th Century comedian, talk show host, and, apparently, war veteran Conan O'Brien, there would be a war eventually labeled "The War of 2012". O'Brien is an American by birth, and it seems unlikely that the world would be united under the Earthican flag a mere 12 years after the turn of the century, so it's pretty safe to assume this war would involve the US in some shape or form. In this war, poor Conan loses his legs, though the exact manner is left to the viewer's imagination. It's unusual that Mr. Groening writes of the fates of contemporary public figures, so the targeting of O'Brien's future is a curious one, and makes us wonder what made him so sure that such a well-known man would suffer such a grisly fate.

As for the war itself, not a single scrap of detail is offered. We are not warned of the cause, the combatants, or, most worryingly, even the outcome of the conflict.

The only war The US was involved in during 2012 was that which it had been waging in the Middle East. The main theatre was Afghanistan, but there were campaigns all over the region. This was during the period in which America got so pissed off after the events of September 11th, 2001, that it just sort of launched itself in the vague direction of sand and terrorism in the hope of blowing up anything and everything wearing a turban and able to point to New York on a map. If they were in possession of a little oil, all the better. At the time of writing, this conflict is still ongoing, and 7 years after the supposed War, none such engagements have ever been referred to as "The War of 2012".
If such a war happened, it remains shrouded in secrecy. It's possible that Mr. Groening wanted to warn us of a shadow operation involving prominent public figures; a battle waged right under our noses, not to be identified and labeled until its uncovering. It's also possible that Mr. Groening had a grudge against Conan O'Brien and wanted to fantasize about his legs getting blown off, leaving him doomed to make a living doing stand-up at ski resorts.

I would be remiss, of course, not to bring up the 2012 Phenomenon. According to the Mesoamerican Long Count Calendar, an ancient Central American system that fueled apocalyptic theories despite being irrelevant for centuries, the date of December 21st, 2012 holds particular significance as the supposed end of an era. Essentially representing the end of the calendar, speculation of what would happen when the date arrived became a popular subject of discussion in the preceding years. Theories ranged from significant astrological events to the straight-up end of the world by way of collision with a massive mythical planet. Bunkers were built, rapture preachers scammed people out of their money, and awesome end-of-the-world orgies were had.
In reality, December 21st, 2012 became known for being the day where absolutely nothing happened, and humanity's collective metaphorical boner for chaos was rendered entirely flaccid. Still, as a prophet himself, Mr. Groening would have no doubt been a fan of the subject, and this whole business may have simply been a hand-waving gesture, leaving his words open to whatever those wacky mayans might have been referring to.

Back to Mr. O'Brien, investigative digging on Google Images and a glance at late night TV would reveal that he does, in fact, possess legs (for now, anyway). This is pretty damning evidence at first glance, but anyone with a bit of skepticism will quickly see that Mr. O'Brien is careful never to be caught in anything less than long pants in public photos. No shorts, no bathing suits, not a single stray banana hammock in sight.
If you're reading this, please find Conan O'Brien and ask him to take his pants off. It is imperative, for research's sake, to learn the exact whereabouts of his freakishly long legs, and whether or not he's now strutting around sporting some sort of early-stage robot leg setup. I'm watching you Conan, you and your legs.