S03E01 - The Honking
"...a savage, intelligent military vehicle built from the most evil parts of the most evil cars in all the world." - Calculon 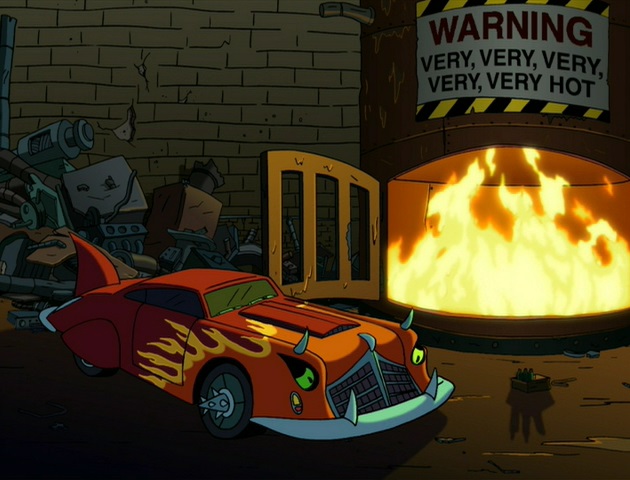 In the year 2019, an unknown military research project would create an intelligent vehicle, built from the most evil cars in all the world. The exact specifications are never revealed, but a few choice parts are called out:

The result of this experiment would be a machine of pure evil. After wreaking havoc, the factory responsible would be abandoned, and the car would still be there in the year 3001. At time of writing, the year 2019 has just come to a close. While no Project Satan exists in the public eye, it remains to be seen whether the car exists somewhere, waiting, just waiting...

Here's a question: what the hell was the point of Project Satan anyway? Given that the military is involved, it seems likely that it was a weapons project, an intelligent vehicle built to...run over enemy combatants? Hey, military research goes to strange places sometimes. Remember the Gay Bomb[1]? Whatever the reason, let's do some amateur archeology and take a look at the cars in question.

The Mercedes-Benz 770, known in sausage-speak as the Großer (Grand) Mercedes, was one hell of a machine. Adolf Hitler's custom-ordered model in particular complimented its luxurious build and powerful engine with bullet-proof glass and some sexy nazi-protecting armor plating[2]. After America single-handedly won World War II and made the planet eternally grateful, The Americans took custody of the magnificent car, because of course we did. Waltzing in and taking the biggest most expensive booty possible, whether it belongs to us or not, is kind of our style. The car passed through a multitude of hands, mostly the shiny and wealthy ones, until finally winding up in the possession of an anonymous European/possibly Russian owner in 2004, as part of a ludicrously expensive bulk buy[2]. In 2018, the car was put up for auction, and a portion of the proceeds was supposed to go to Holocaust education efforts[3]. Unfortunately the largest bid offered was reportedly only $7 Million[4], and the auction fell through. Or did it? Only a year before Project Satan's proposed construction, and the auction of one of history's most famous cars conveniently ends with the buyer being no one? Awfully suspicious if you ask me. Let's move on.

I couldn't find much in the way of concrete information regarding the location of any vehicles related to Charles Manson or his creepy "family". What do you want from me, I live in an abandoned water tower with stolen internet, I'm don't have access to a lot of academia. There are a few rumors and unsubstantiated stories, mostly involving either innocent sales or lost scrap piles. Either way, it's conceivable that someone with government resources, nay, secret government resources, could track down a single turn signal.

KITT, the car from Knight Rider was a 1982 Pontiac Firebird Trans Am. I'm just gonna go ahead and assume Calculon was not referring the post-2000 reboot of the show, because Mr. Groening wouldn't have been aware of it and really, who gives a shit about modern 80's reboots. Because filming TV shows is hard, there were multiple actual cars that played the "character" of KITT, and its unclear to which Calculon was talking about. As a result, it's difficult to tell which one could have fallen into the hands of Project Satan, especially since there were apparently more "original" cars auctioned off than were actually ever built[5]. Still, if you could be alone with a real one for even a few minutes, it can't be hard to someone to swap the windshield wipers without anyone noticing.

Finally, there's the strange case of Ed Begley Jr. The dude has apparently been a huge proponent of electric vehicles ever since the 70's, a time when no one even knew they existed because Elon Musk hadn't yet captured the imagination of rich middle aged entrepreneurs and lazy idealists on reddit. He didn't invent the motor, and by all accounts doesn't seem to be an evil guy, but the show refers to the general concept as "the most evil propulsion system ever conceived". Why? Futurama certainly trends toward being pro-environmental causes, so this seems an odd jab to make. Still, the technology was in its infancy at the time, perhaps even Mr. Groening isn't immune to getting something wrong. On the other hand, of course, the electric motor could always turn out to be our downfall. Rogue self-driving Teslas? Unstoppable electric drones? Electrically-powered nukes? Were we being warned that monsters like Project Satan are the inevitable result of General AI mixed with electric cars, both of which are quickly gaining prominence as I write these very words? Given most of the show's portrayal of robots as either slaves at worst or scrappy outlaws at best, Mr. Groening certainly seems skeptical of allowing AI into spaces where it isn't directly under the thumb of humanity. I'm just saying, keep an eye on the self-driving car space, and keep an even closer eye on its windshield wipers.