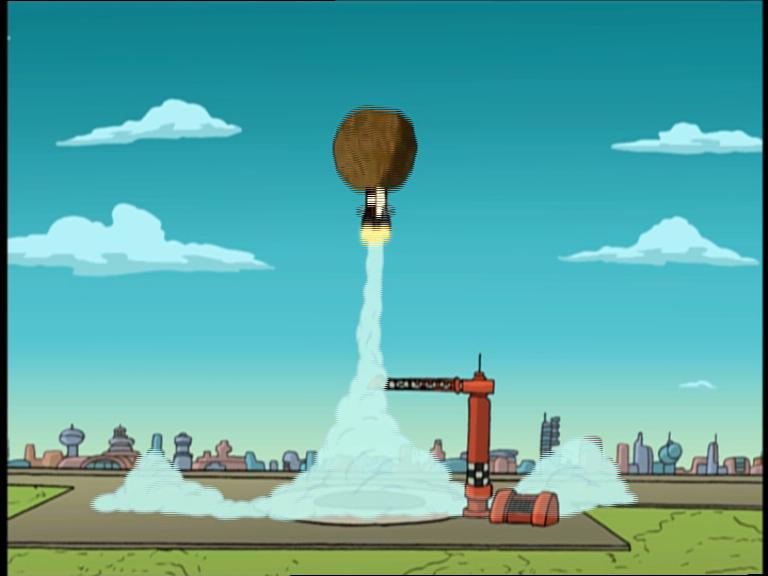 After pushing an entire city's collection of municipal waste out to sea in the year 2000, This unfathomably large and unimaginably stinky manifestation of mankind's procrastination, dubbed "Fun in the Sun", is foretold to return to New York City in 2052. Using the city's bizarrely well-funded mob connections, the government obtains a rocket, globs half a century's worth of random crap onto it, and shoots it into space, thus solving the problem of littering forever. Unless it comes back to Earth one day of course, but that's a problem for future humanity. "Eh, fuck it" declared the Big Apple in one unified voice.

As previously discussed, the problem with dealing with all of that trash at once is that New York won't become a garbage-free utopia of smug recycling hippie bastards until around 2500, leaving a lot of future littering with no apparent long-term solution. Whoever runs NYC in a few centuries had better either have some really good mob connections or be sleeping with whoever runs the space-faring Musk Empire by then, because we're gonna need a lot of rockets.

Still, the idea of consistently launching payloads of cargo into space isn't an unheard of goal for the next few decades, much less the next few centuries. Even without an advanced degree in theoretical mathematical space wooshy engineering, I feel I can safely predict that we as a species will probably get pretty good at throwing shit into the sky over the next half-millennium. While Mr. Groening might not have the exact timeline or magnitude nailed down, I think he got the gist. Too much stuff on Earth, scientists get better at boom-boom-go-up-ology, stuff goes to space instead. It checks out. The problem here isn't the method or Mr. Groenings accuracy as a prophet, but rather with the consequences.

The plot of the episode in question is primarily concerned with the fallout, both literally and figuratively, of the giant ball of space trash. As the ball, after swinging around the starts for centuries, comes back to Earth. As it approaches the atmosphere, it threatens to break up, sending deadly fireballs of ancient human waste crashing into Earth, wiping us out in a deadly meteor storm of hubris that would be as terrible as it is ironic. As per the episode's interpretation, it's just the one ball of garbage but, as we've been discussing if you'd just listen to me, dammit, we're dealing with much more than that. Even if we do some terribly rough whiteboard guesses and say that a new rocket fleet would have to be sent up every couple of decades between 2052 and 2500, that's approximately a shitload of shit flying around in space, just waiting for its chance to take revenge on the planet that cast it away. 500 years of periodically fighting off wave after wave of burning death by 21st century fast food packages. Imagine the scale of the planet-wide defense system we'll have to build, the resources it'll suck up.

This isn't just a warning against littering our planet (it certainly is), it's a warning against littering our universe. Over a long enough period of time, the consequences of virtually any action taken can and will come back to bite us in our collective ass. As we face down the barrel of life outside the confines of our pale blue dot, it would be smart of us to get some damn perspective. If we don't change our ways, it may not be us that have to deal with the "depressing" consequences, but it'll certainly be our distant descendants, those lazy whippersnappers. If we treat the solar system, the galaxy, the universe, the same way we treat Earth, we'll be in serious danger of running out of places that aren't ugly and reeking of burning tires. Recycle, folks.