S02E07 - A Head in the Polls
"Frankly, I never felt voting to be all the essential to the process." - Gerald Ford's Head 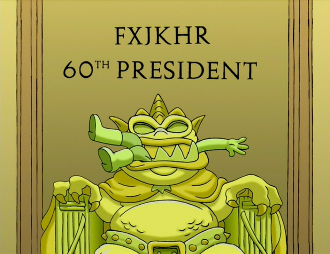 Rarely does such a vague yet terrifying tidbit of information come from Mr. Groening. While exploring contemporary Washington DC, We see our characters sitting on the steps of a building that bears remarkable resemblance to the present-day Lincoln memorial. Illuminated within is the figure of a huge alien monster, regally perched upon a throne of skulls, a humanoid body in its mouth. Identified only as "FXJKHR", this creature will apparently be our 60th President. That's probably a bad thing, America.

The first question raised here, after "Oh no, what the fuck?", is whether this refers to the Presidency of the United States of America, or the Presidency of Earth. Mr. Groening is coy as far as revealing precisely when the Earthican unification took place, so this throws our timeline into a pretty fuzzy place. If FXJKHR ruled the US, this puts his election year anywhere between 2076 and 2136, depending on how many terms were served by the intervening presidents (At time of writing, 45 is serving his first term. We also assume that two 4-year terms remains the legal maximum. I did the math. Trust me. I went to college.)

And that's it. That's all we know. Hell, the clue contained in the number 60 might even be a clever ruse to throw us off the scent, since we know nothing about the order or number of Earthican Presidents. We don't know whether the monument's resemblance to the Lincoln Memorial is due to its replacement or a simple visual reference. We don't know who the poor soul in FXJKHR's mouth is. We don't know how he/she/it/xyeh became "President", rather than "Warlord", or "Emperor", or "Please Don't Disembowel Me". Was the election won fair and square, or was DC in ruins for years? He seems the violent type, but for all we know his greatest crime is voter fraud, and skulls will just become Presidential decor in a few decades.

Really, I'd feel a lot more comfortable if the great and powerful FXJKHR did descend in a warship and slash and burn his way to DC, because the alternative is a lot more scary. Not to judge a book by its cover, but I shudder to imagine a political climate in which FXJKHR was the most appealing candidate in a legitimate election. Picture the campaign ads: "A Strong Leader, FXJKHR can lift the entire supreme court into his mouth!". Picture the reddit threads trying to justify that no, really, FXJKHR has the common man's best interests at heart when he promises to "slaughter all who stand in the way of his path to blood and power". Picture the poor bastards trying to run against him, trying in vain to explain why the harvesting of migrant children for fertilizer isn't all that environmentally sound after all.

Perhaps such a leader in the White House was exactly what spurred the planet into uniting under the Eartican flag in the first place, with hopes of wiping out dictatorships across the globe. It would be a silver lining to this cloud of severed limbs, and we have to believe Mr. Groening offered us this warning for a reason. Still, the skulls are pretty spooky.