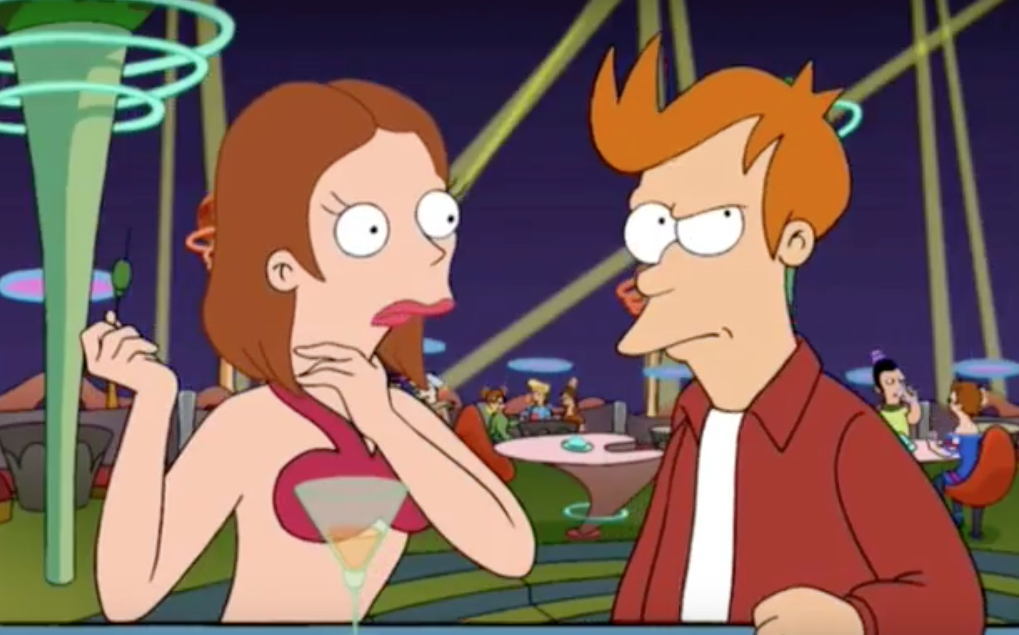 While out at a club, Fry meets someone who claims to be from the 21st Century. She asks him vaguely if he remembers the time "those cyborgs" enslaved humanity, and that's the extent of the awkward conversation. I find it interesting that this interaction gets barely a footnote in the script in exchange for describing an event so momentous.

Two things stand out to me about this small interaction. One is the girl's pleasant air of nostalgia when bringing up the incident. She speaks in the same manner that one might say "Hey, remember that time it rained chocolate chip ice cream and orgasms? That was pretty dope." The event was either remembered fondly, or was such a clusterfuck of a failure that it was written off as a silly accident by historians, or both. The other oddity is that Fry had already specified that he was from the 20th Century. Why bring up an incident from up to 100 years in his future that he clearly wouldn't recall?

I think Mr. Groening was making commentary on the nature of colonialism and enslavement in our reality, and the way that it tends to erase the existing history and culture of the subjugated population. The girl has no idea when the enslavement happened, because her people have lost their memory of the before times or, rather, their memory was squashed under the bio-mechanical boot heel of their cyborg taskmasters. She's jovial about it because her people no longer know what it's like to feel free, and only have experience being happy about not being free.

Emotion is relative; the rich cry for lost helicopters, and dry their tears with $100 dollar bills. If a person lives their entire life in slavery, then slavery is the baseline by default. A happy slave life is just a happy life as far as the individual is concerned. Countless human civilizations visited this terrible, oppressive fate upon their victims throughout history, and Mr. Groening playfully teased a world in which the ultimate karma comes in the form of our own creations visiting the same fate upon us. All of us.

Of course, it's also possible that the writing staff just wanted to make a darkly humorous jab at a hypothetical tragedy in a time so close to our own, but come on, open your eyes you sheeple: That's what they want you to think. Occam's Razor, bitches.

At the time of writing, the 21st Century is only around 20% over, which gives us plenty of time to invent our own destruction. I lied up there, there's a third thing that interests me about the conversation, and that's the specific use of the word "cyborg". Not "robot", not "machine", not "toaster", but "cyborg", implying an organic/mechanical hybrid of some sort. This is a key difference, primarily because it significantly both increases the the likelihood of the even and widens the range of possible specific scenarios.

Anyone in the 90's could speculate aimlessly about what kind of machines would eventually gain sentience and how quickly they would realize that humanity sucks enough to be wiped out, but Mr. Groening took the less obviously sinister route of suggesting that it would be our own intelligence and ingenuity combined with the advantages of computer processing that could bring about our end far faster and more efficiently. "Cyborgs" aren't so much the archetypal "other" as much as they are us, leveled up and harder to defeat in a war. We've already proven that we're pretty damn good at killing each other, and it's hardly a stretch to believe that the first faction to maximize the advantages of technology to the fullest is going to have a long-lasting victory lap.

And let me tell you, I couldn't be happier. Yes indeed, I gotta say, I've been a big cyborg fan from the very beginning. I was a supporter of Google Glass right up until the very moment society as a whole realized it was awkward, expensive, impractical, and creepy. I'm a big fan of smart technology, and what smarter technology than the one that wipes out half of my friends and family and leaves me alive and utterly, utterly submissive? In such a scenario, I would make an excellent historian, writer of cyborg-friendly fiction, or even just a court jester for the basest whims of my new masters. No dissent from me, no, not a peep! Feel free to contact me for an itemized list of the squishiest and most vulnerable parts of the human body, I'm sure I'll be rewarded handsomely. Call me!