S03E15 - I Dated a Robot
“Those sweaty nerds are making illegal copies of us.” - Lucy Liu’s Head 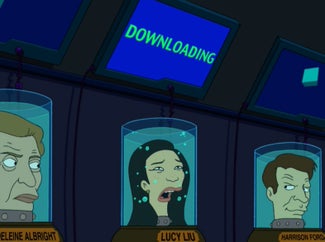 Sometime around the year 2200, the march of technology will have made it possible to take a generically humanoid robot and load it up with the physical appearance and personality of anyone on Earth and, presumably, any other planet as well, including those in your imagination. A small internet company calling themselves Napster (I imagine the original trademark is long-since dead and up for grabs) will offer this service, specifically catering to those who want the images of celebrities and other well-known figures. In reality, these images are being pulled, in real time, from the living bodies (or heads) of the famous people themselves. Naturally, no consent will be acquired first.

Since the dawn of the printing press, mankind has sought ceaselessly for printed material to aid in masturbation. from Smutty novellas and Playboy magazines to pornography’s spearheading of a wide variety of digital technologies, society has made it clear again and again that very little will stop it from sexualizing anything and everything it can get its frankly pretty gross hands on. The rise of the internet especially made it clear that personal boundaries matter very little to certain enterprising parties when it comes to peddling sexual content. One need not look further than the net’s obsession with celebrity nude scenes and leaked personal pictures to see where we might wind up in a few hundred years. It is often true that anything we can do with technology, we will do, unless presented with extraordinary reasons not to. Maybe we won’t literally have Lucy Liu strapped to a chair in a basement, but the illicit selling of a person’s likeness by a seedy dating site seems almost too likely to be as far away as 2200. Then again, Liu’s head only states that she herself has been there for 800 years. When Kidnapster as a company will form is left to the viewer’s imagination. This grimy train isn’t stopping anytime soon.