2208 - The Speed of Light is Not a Constant, Apparently 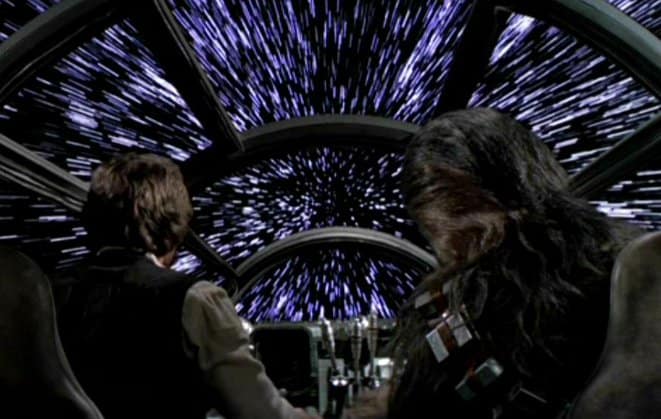 At time of writing, it takes months just to get to Mars, our closest neighbor in this solar system. It takes years to get probes to the edge of our little cosmic suburb, and the distance to any other star systems would likely be measured in lifetimes. There are few things humans are better at building more than the explodey kind, but we can only explode ourselves in a certain direction so fast before bumping up against the laws of nature. We're pretty much stuck behind the speed of light, which is why we keep sending robots on far-reaching missions that our shitty bodies are too busy aging to handle. Luckily, in 2208, science solves the problem of not being able to travel faster than light by simply increasing it, thus increasing the horsepower ceiling for our own spaceships. This paves the way for interplanetary travel on a trivial basis and an unprecedented level of universal habitation for many species. The text hand-wavingly explains this feat as the wondrous doing of scientists, instead of acknowledging the entire banana split full of questions it raises.

Guess what? Light travels really fucking fast. Even ancient Greek philosophers argued that light moved with an invisibly high speed, and those guys had never even shined a laser pointer at an airplane. Many experiments have been done over the past few centuries to figure out exactly how fast light moves, but it was in 1983 that we threw our collective hands up and intertwined the definition of the speed of light (now referred to as the SI unit c) with the definition of a meter. The speed of light is 299,792,458 meters per second, because a meter is how far light travels in 1/299,792,458 seconds. It's not circular logic, it's science! This particular science was done by the 17th General Conference on Weights and Measures, which is a real thing held by the International Bureau of Weights and Measures, which is also a real thing that exists. Humans are weird. We'll form a committee based on just about any damn thing.

But getting back to the issue at hand, this throwaway line is by far one of the of most baffling things in all of Futurama. Will scientists literally alter the fundamental laws of nature in such a way that enables light to travel faster and accommodates transportation between galaxies "in mere hours"? Is it simply a matter of creative scientific measurement changing the definition the speed of light, like a billion dollar business futzing with the numbers to avoid paying taxes? Did anyone call the International Bureau of Weights and Measures? Mr. Groening acknowledges the impossibility of breaking the speed of light, so what gives?

I haven't taken a physics class since dropping out of high school, and I gotta say, I'm stumped here. They should have sent a scientist, or at least a poet with a college degree. The only conclusion I can draw here is that Mr. Groening is a victim of his own optimism. Many events depicted in Futurama rely on a united people spread across the universe, and this simply isn't possible with our current limits of travel time. Like the wide-eyed old inventor he created, Mr. Groening puts his faith in science to discover the undiscoverable and to do the impossible. "That's what being a scientist is all about", he writes, offering a prayer to the scientific community of today to solve the problems of tomorrow. Conveniently, this also creates a quick and dirty solution to the problems presented by Futurama's many far-reaching storylines. He knew that if this particular prediction doesn't come true, we'll have to come to grips with the possibility that even if we aren't alone in the universe, we may never see, or even communicate with, those who exist far, far away.