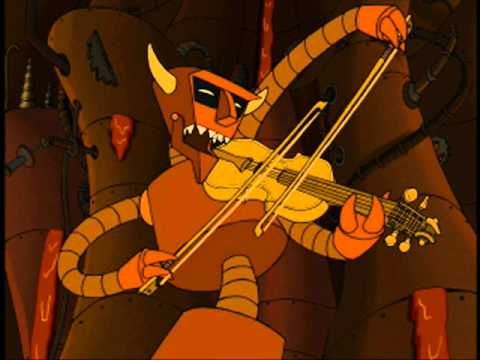 So there's a lot to unpack here. First of all, sentient robots exist and live among us in society. Fine, it's the late 2200's, I think we're all willing to believe here in the year 2019 that either Elon Musk or the sex doll industry are already most of the way there. What's far weirder is the existence of actual, factual, robot hell. At some point, these robots, either by their own merit or at the behest of their programming, establish a physical space known as "robot hell", ruled over by a "robot devil", whose origins are left for the viewer to imagine. Was he built by us to keep robots in check and ensure that they followed our bidding by threatening them with religious damnation? Is robotology a construct of AI's evolution, resulting in a robot devil constructed by other robots? Is this perhaps a symbolic mockery of the way we humans create our own "devils" in society in order to keep our populations subservient through fear? Why, oh why does the robot devil get his own backing band?

These are questions left unexplored. What is made known through this episode is the Fairness in Hell Act of 2275, giving the right to challenge the robot devil to a fiddle contest in order to win back either their or another's soul (the specific legal details aren't covered in much depth). If successful, the challenger wins the soul and a solid gold fiddle. In case of failure, they win a smaller silver fiddle and are apparently killed, which makes the silver fiddle seem a bit snarky but hey, it fits the spirit of a devil's bargain, so why not.

Mr. Groening shows his insight once again with this one. We don't know anything about the world pre-Fairness in Hell Act, but it seems likely that it was introduced to combat the unjust treatment of the eternally damned. It's a good sentiment, but those don't tend to last long in the real world.

We can imagine political ads full of crying and immolated robots, shown in slow motion while Sarah McLaughlin's distant descendant begs mercy on their souls and utterly ruins a beautiful song by forever associating it with annoying commercials. Politicians push for "Hell Reform" bills and talk big about stopping unlawful damnation and freeing those who were sentenced to 3 billion years for minor sobriety offences. The public is split between hippies who dream of free robots and "hard on crime" fundamentalists who simply shrug and say "if they didn't want to be roasted alive for eons, they shouldn't have stolen my purse". Finally, after years of being used as a political football and having its edges shaved off until it resembles a balloon, the Fairness in Hell Act of 2275 emerges utterly lukewarm, having pleased absolutely no one.

Sure, a fiddle contest is better than offering no recourse at all, but it's a little arcane, isn't it? How many cursed robots would have been built with the skills of a concert violinist besides, you know, the once built to play music. I guess those robots can murder and whore around town all they want, because the rules of hell essentially don't apply to them as long as they can outplay the robot devil every once in a while. Even if the Act only refers to rescuing other robots, that still limits the potential affected to only those with friends who bother to locate and plunge into hell to do some rescuing. Legal reform that claims to bring justice to the downtrodden while only benefitting a privileged few and leaving the rest to suffer by putting up weirdly exclusionary requirement walls? Looks like the future hasn't changed as much as we thought.