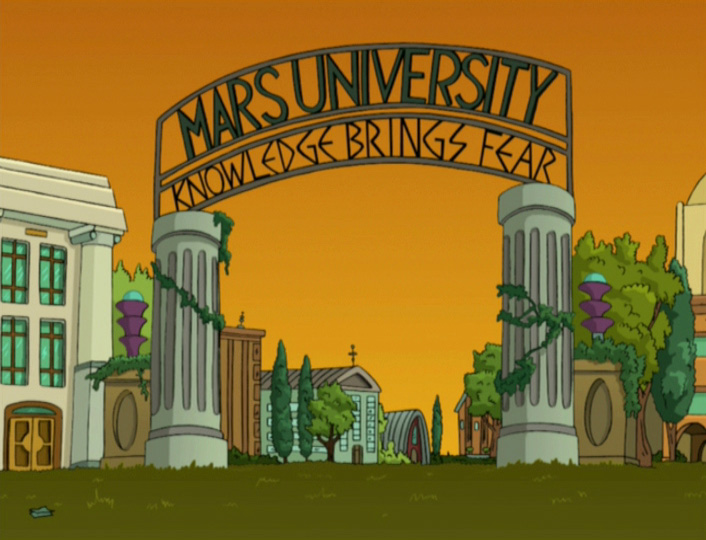 In the year 2636, a university will be founded on the distant red world of Mars, and whoever named it won't be terribly imaginative. Mars University, supposedly, is exactly what the planet needs to turn it from a dreary, uninhabitable wasteland ("much like Utah") into a place that's actually liveable. From the sheer size, popularity, and prestige suggested by the episode, it seems that Mars U will become a prominent player in the academic world. It will attract students from all over the universe as well as planting the seeds for for a martian civilization. It must either be an excellent academic institution or at least a totally bitchin' party school. It will contain the largest collection of literature in the western universe, and even adopt the greek fraternity system, for both humans and robots. Which is neat; equal opportunity is always nice to see in space.

Aside from the existence of the institution itself, it strikes me as odd that Mars is identified as being an empty wasteland for a whole 600 years after the show's run. It's only after dipping our toes a few decades into the 21st Century that Humanity began seriously flirting with that coy little redhead in the sky, but Mars has been a fixture in our space-faring plans for a very long time. With most other planets in our solar system being either face-meltingly hot, testicle-shatteringly cold, or just plain made of gas, Mars has always been the most viable candidate when talking about a new place for Humans to explore, inhabit, and eventually find a way to fuck up. It's the natural next step now that we're bored of the Moon. Why, then, does Mr. Groening think it'll take us so long to get there?

Estimates of first Human contact vary wildly, because scientists tend to estimate things like an office drone trying to figure out which answer will get the boss off their ass the fastest, so it's not like we have a concrete blueprint at the moment. Still, with manned missions being planned anywhere from 2030 to 2050 or so, one has to wonder why, with the pace at which technology improves, the span between touchdown and inhabitation will be significantly longer than it took to get us from a full map of the sea-monster-free oceans to a man on the Moon. I feel that this timeline cautions us not to rush too quickly into the arms of mother Mars, lest we wind up in a corny sci-fi disaster movie of our own making.

First off, terraforming the damn thing is an obvious necessity if we don't want to live inside a bunch of lame, cliche bubbles. Martian society in Futurama is depicted as living in the open air, having been terraformed slowly after the university brought enough plant life to kickstart the formation of a new atmosphere, but this is, in all likelihood, simplifying a complex solution. The art of terraforming is, to put it mildly, an insanely difficult scientific question that has the top minds of Earth still shrugging their shoulders and saying "I dunno, what if we just nuked the bastard?". From importing various compounds and gases to using comically oversized supervillain space mirrors to heat up the surface, the brainstorming session is still very much in the tossing things at the wall to see what grows microorganisms stage. It's entirely possible that Mars will be populated solely by exploration robots and stray space wreckage for hundreds of years while we finish arrogantly cramming an atmosphere onto it, mother nature be damned.

Outside of logistical issues, we can only guess as to what would cause the delay. Perhaps our problems on Earth will postpone the mission due to lack of resources available. Perhaps squabbles between our un-unified counties will prevent sufficient collaboration. Perhaps we'll find a better target to manifest our destiny all over. Whatever the reason, we shouldn't forget the promise of Mars University, and what it stands for.

Futurama is, at times, a very sad show. Much of life in the far future paints a grim picture of the near future. Our current societal issues are depicted as either petty squabbles or unending constants of the human condition. Our best laid hopes and dreams will be reduced to crumbling artifacts and brief history lessons. Richard Nixon will serve a third term in the White House. It's awfully bleak in many ways. It's positively refreshing then, to find that a good old fashioned center of higher learning, academic fellowship, and frivolous drinking contests is what will finally bring life to what was once lifeless.