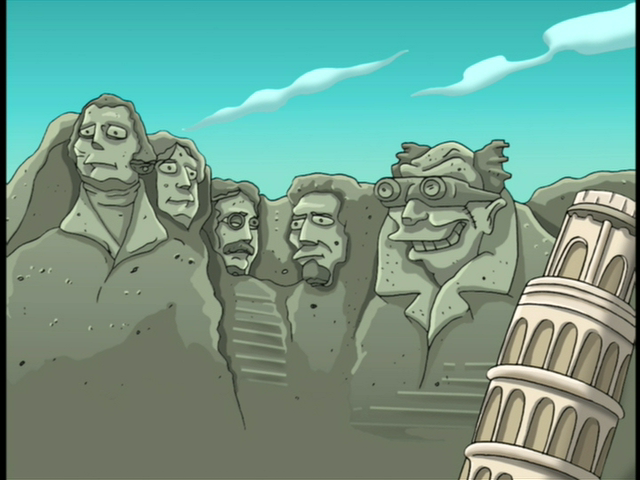 Sometime in the 2600's, New York will have a "Super Villain" governor, and I gotta say, that seems pretty rad. Dr. Farnsworth specifically used the word "elected", so we know he'll take power by over-the-top show of force, which makes this an arguably positive thing. It really shows how far we will come in terms of social acceptance, when high ranking political figures can be openly criminally insane, instead of just secretly criminally insane, refusing to admit it even though come the fuck on, we can all tell, you aren't fooling anyone.

This confident-looking and unnamed gentlemen surely had a very interesting career, full of thwarting do-gooders and building fascinatingly impractical contraptions, but we unfortunately only get a peek at one particular set of deeds. He'll steal "most" of the world's monuments and move them all to the New New York Monument Beach, the seaside equivalent of that miniature eiffel tower in Vegas, only multiplied a couple times and it's actually the real thing, probably stolen in a kick-ass heist. The follow monuments are present at Monument Beach:

As awesome as this one is, it's a bit baffling. This mystery man is never brought up again, and you would think such a prominent figure would have more of a tangible impact on the country's, or at least the state's, political climate. Where did he come from? What other major actions did he take? Why the hell did no one move any of these monuments back in the 400 years since the incident? Did he assume power, whip out his gravity ray to move some shit around, and vanish like the flashiest thief in the night? Where are the residents of Inglewood, CA getting their donuts now? I want answers, and Mr. Groening is as coy as ever with this one.

Let's take a step back. Perhaps taking this scene literally isn't the point. After history has shown us that America is willing to elect actors and crappy real estate moguls to positions of power, Mr. Groening seems to like playing with just how willing we are to withstand more and more absurd candidates. Super Villain governors, Richard Nixon in a third term, and don't think I didn't notice Jesse Venture's Head in the Hall of Presidents, Mr. Groening. You can't hide from me. Maybe New York really will have a comic book character for a leader, but maybe Mr. Groening just wants to warn us of what will happen if we don't hold our politicians to the same basic standards we hold our friends and family. Yeah, I bet the Joker and Lex Luther are fun at parties, but I wouldn't trust them to repay the twenty bucks I lent them, and I'd be pretty annoyed if New York stole all of the world's cool shit just to display it on a tacky beach. Just because a guy looks cool when carved fifty feet high into a mountain doesn't mean he has the best interests of our welfare in mind. Vote thoughtfully, folks.