S03E08 - That's Lobstertainment!
"Why, I've been a Harold Zoid fan since back when my hips were made of bone" - Hubert Farnsworth 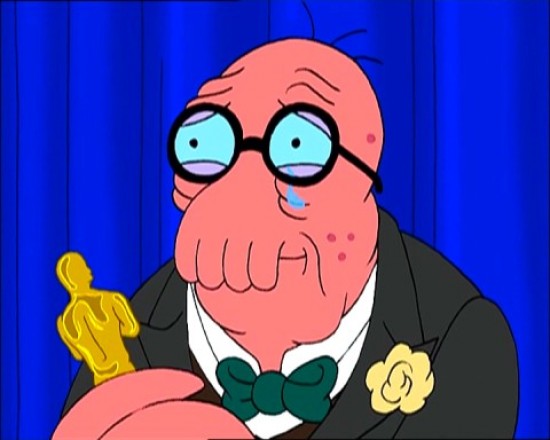 In the first few decades of the 2900's the world will see a return to the black and white silent form factor of film in the form of three-dimensional hologram films, played out in physical space. In this episode, we see one such film play out, A Close Shave: a classic wordplay gag from the year 2922, starring a young Decapodian comedian named Harold Zoid decapitating a poor patron of his barber shop. The company named in its title sequence, Metropolitan Holoplays, presumably turned out a number of these short films during its time.

Curiously, however, the form factor is apparently not long for the world, since the show depicts many different instances of entertainment media, and holoplays are nowhere to be found. More traditional forms of 2D media, from television to film-reel cinema to digital video on the internet abound, but our friend Harold Zoid is a washed-up actor; less due to his lack of skill and more due to the dead nature of his medium. Damn talkies.

As long as there has been entertainment media, there have been attempts to spice it up with new form factors, new promises of revolutionary creative outlets, and new ways for the greedy cinema industry to take people's money. Consider the recurring phenomenon of 3D film (itself making a cheeky appearance in a robot cinema on Chapek 9). Film makers have been trying to cram two slightly different images in to our eyes since the early 1900's in the form of stereoscopic 3D, a technique which always promises to put the viewer in the center of the action, but usually just results in body parts flying at the camera. Every few decades or so the idea resurfaces, from the red and blue specs of the 1980's to the hip new Avatar's and Avenger's of the 2010's. At the time of writing, however, few if any films are still shown in 3D, and the trend appears dead in the water, at least until the next bored cinema executive decides to take a whack at it.

Holograms, it would seem, are doomed to suffer the same fate. Mr. Groening seems less interested in warning us specifically of the rise of hologram media, but rather to observe that the more things change, the more they stay the same. "This time", we always tell ourselves when a revolutionary-sounding gadgets like these comes around, "This time, the tech will be enough to make good on the promise of the golden idea". It rarely is, and Perhaps in the 3010's holograms will come back again, with color, sound, and plenty of synthesized blood to splatter on your conference room table.

This concept isn't limited to technology. It's also worth noting that the aesthetic we see, from its costumes and ragtime musical choices to its sense of humour, neatly mirror our own silent film history of the 1920's. What's old will always become new again, nostalgia will fuel and inspire new trends, and "hip" will always be cyclical. Even as he wrote in the medium of animated television, Mr. Groening knew very well that his was a dying medium in a dying culture, just like every all the others. Just as we begin dying as soon as life begins, what's popular is dying as soon as it's created, fated to fade away and be reborn a few or a few dozen decades later, with a cool new twist and a whooping lobster man to breath new life into it for a new generation. Harold Zoid himself is a living, breathing, metaphor for his own line of work: famous, washed up, and brought back into the limelight for one more turn on the catwalk by an injection of cash and just a pinch of Hollywood insider corruption.